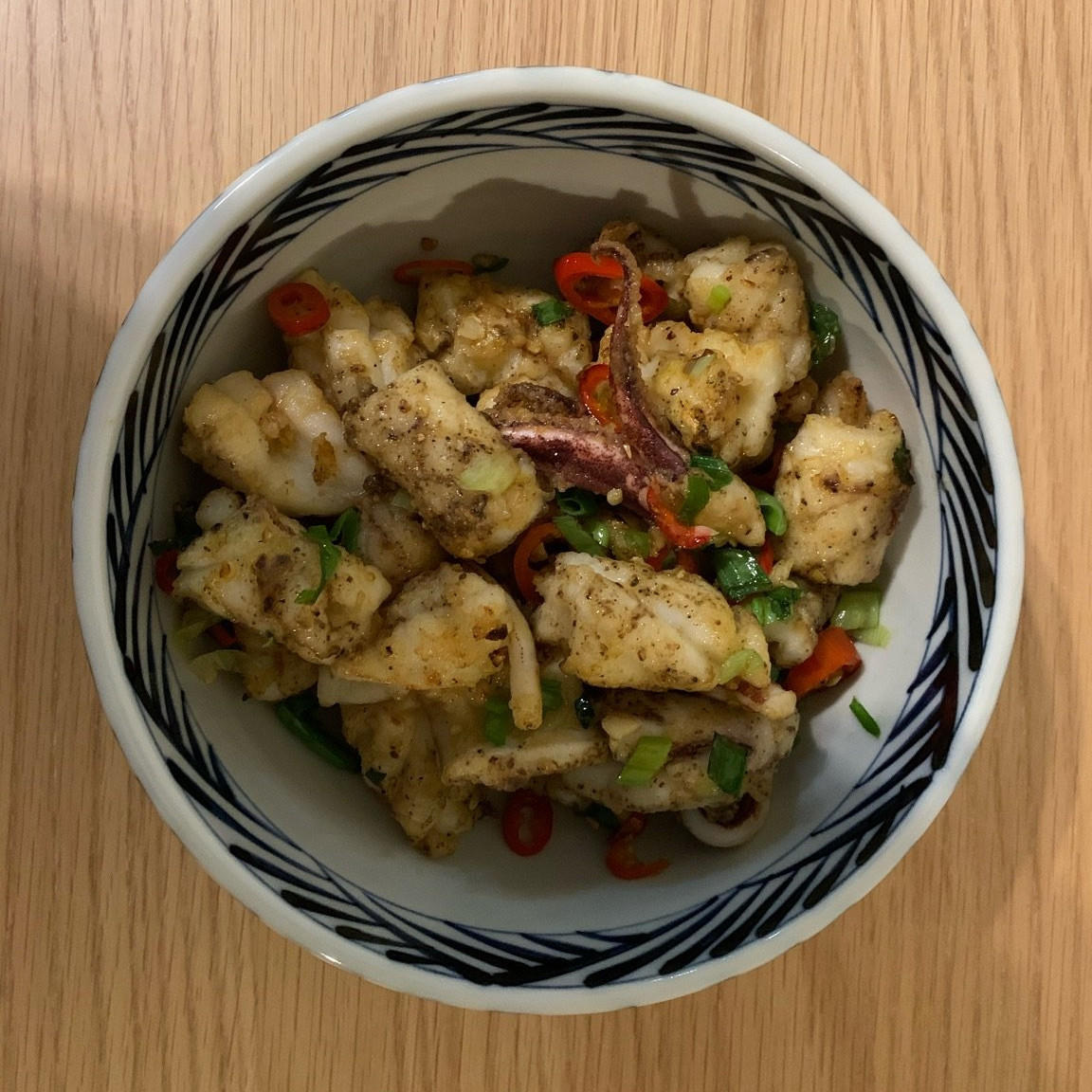 Since the lock down has kicked in and supermarket shelves have become increasingly empty due to the inconsiderate hoarding, we have taken to shopping at our local-ish fish mongers instead. This has been a game changer for home cooking and vital for Laura to get her seafood kick whilst in quarantine. We also want to do our part to support local shops and fisheries that are suffering due to the decreasing demand from overseas.

This week the squid was looking very fresh and we couldn’t resist purchasing one. After some discussion we decided to make crispy chinese style squid, we have tried a few recipes in the past but this time round we feel like we are onto something. It came out less crispy - we will discuss why later but it was a flavour bomb.

We have eaten our fair share of squid in restaurants around London, Foo will always order it as a snack if he sees it on the menu. So I guess we have developed requirements - here are a few things we are looking for when eating crispy squid: 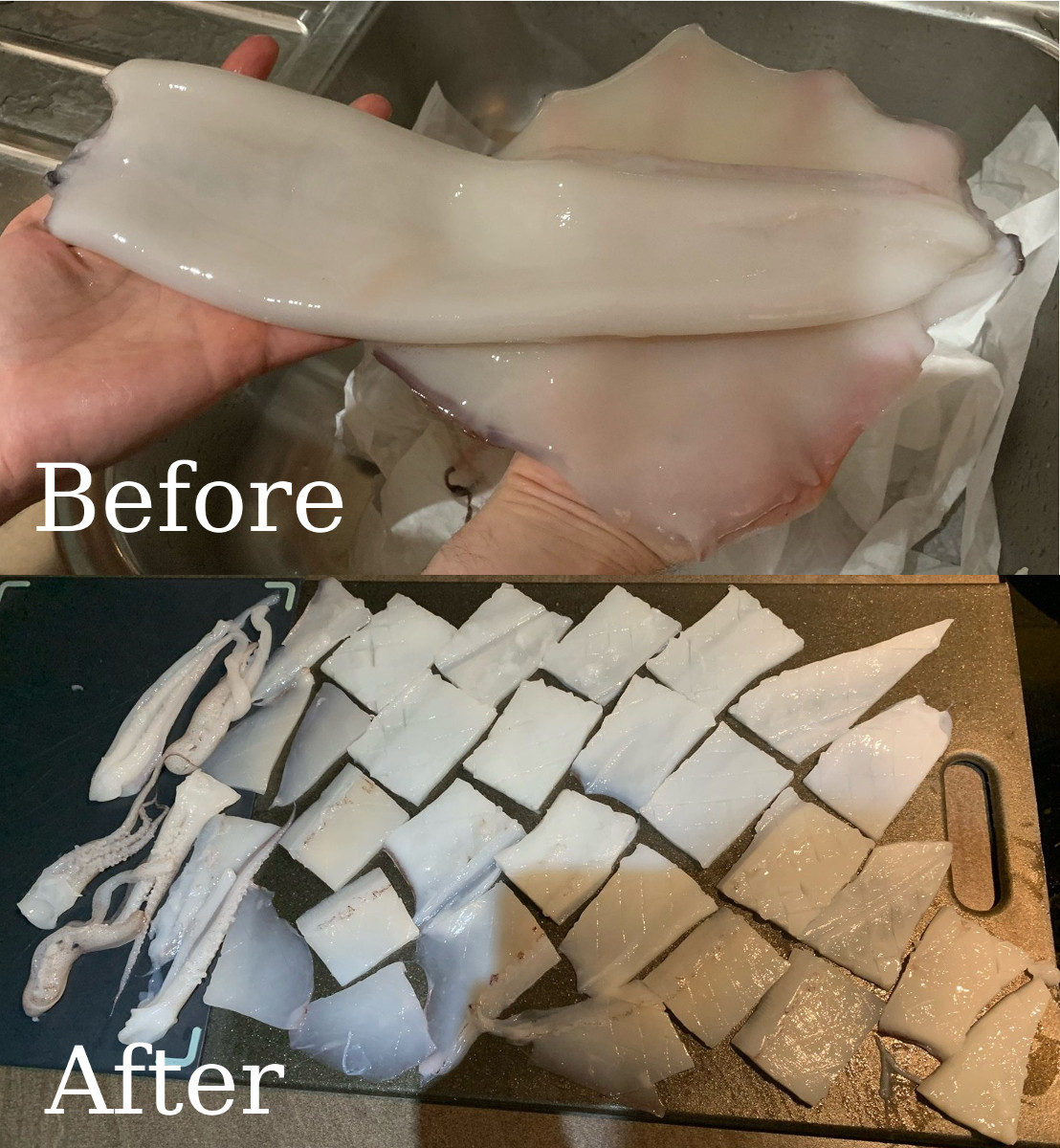 Ask your fish monger to clean your squid for you as it speeds up the process to get the squid into your belly. If you have been gifted a squid (lucky you) that is not cleaned, you want to make sure you remove the skin, ink sac, beak and pen (the hard part that is inside the squid body). Remember to pat dry the squid, or there will be too much moisture to evaporate during the frying process!

To achieve that perfect squid curl and add that chefy touch to your dish, scour the inner part of the squid. A larger squid makes this easier because it has thicker meat: you can scour deeper without cutting through and it can stay in the oil for longer, to crisp up without shrivelling right away.

To egg or not to egg?

After some research on batter techniques for making crispy squid and many youtube videos later, we came to the conclusion that an egg-less coating was more appealing. An egg-based batter obtains a good layer of crunch but it forms a casing that traps moisture inside - we were worried that this would result in the squid steaming inside the batter and becoming chewier. We opted for a mix of plain flour and corn starch instead.

Corn starch is a staple in asian-style frying and makes for a light coating that crisps beautifully. We used a mix with flour because that’s what many recipes we used as a reference had as a base, but after some more digging around the science behind crispiness and starch we wonder what would have happened if we skipped on the flour altogether, as we do with our kara-age. From what we found, the molecules in starch make stronger bonds at high temperature and that’s what creates the crispy sensation. Corn has the highest content of the right molecules compared to other starches.

Flour or not, to summarise: a coating gives a good mouth feel and with fresh squid you get the flavour of the sea coming through, not just the taste of batter.

Our fat fryer is a god send for deep frying but during these times we have been trying to conserve cooking oil so we did a shallow fry in veg oil. Usually, we have temperature control from the fat fryer but with a shallow fry you go by eye or stick some wooden chopstick and see if the oil bubbles vigorously around it. Whilst the squid came out perfectly cooked, it was not at the optimal crispiness level and the oil needed to be hotter before dropping the morsels of squid in.

Bland food makes us sad… we are a heavy handed couple when it comes to seasoning and love a bit of maldon salt on, well, everything. So when we discovered this recipe that used a combo of pepper, salt and sichuan pepper, we couldn’t resist trying it out. Foo fell in love with sichuan peppercorns and it often appears in a lot of dishes we make. The citrus-y notes and aroma it has elevates this dish.

We used a combo of vietnamese and sichuan peppercorns, crushed alongside corse himalayan pink salt in a pestle and mortar (a kitchen must have item). Don’t go using pre-ground pepper for this, you just won’t get the same punch that comes from freshly ground and toasted peppercorns. It takes just a few minutes to toast and grind so don’t be lazy and just do it.

Seasoning the squid directly and not the batter/flour mix was a nice touch we got from the recipe - the seasoning adheres much nicer on the scored squid and you retain more flavour.

The squid is tossed at the end in a non-negotiable garnish of garlic, chilli and spring onion. This is a classic chinese style topper used on a lot of fried dishes, make sure you make ample amounts of the topper as you want a bit of this garlicky goodness with every bite of crispy squid.

Aperitivo in the time of quarantine
Lazy loaf tin bakes